On 21st October 2020, Deputy Chief Constable Julian Moss and Inspector Liz Warner of West Mercia Police invited UK police colleagues to join a ‘Let’s Talk Menopause’ webinar. The event was one of a series of events run by the organisation marking World Menopause Day on 18th October. Liz Warner is the chair of the women’s network, WoW (Women of West Mercia) and DCC Moss is the West Mercia Police He For She lead.

Having menopausal symptoms can really affect a woman’s life, sometimes in a detrimental way. Not enough men and women talk about menopause - there is still much uncertainty about what the menopause means and how it can be managed. Many women don’t understand what they are experiencing when going through menopause themselves, so how can we expect others to understand and support women?

The webinar was opened by DCC Moss and consisted of a variety of speakers, including police colleagues talking about their own experience of the menopause, West Mercia Police’s Clinical Nurse and Welfare Officer talking about the physical and psychological steps within menopause, an Officer Safety Trainer talking about fitness and diet, a representative from the Police Federation and a colleague who introduced West Mercia Police’s new Menopause Assessment Document. This document is to be used by supervisors to facilitate a conversation with their staff to identify adaptations that can be made in the workplace to assist the person experiencing menopause in their day to day life at work.

Dr Verity Biggs, GP with special interest in the menopause at Newson Health, also spoke at the event and covered so many topics relating to the menopause, from the Mirena Coil to hormones, from sleep issues to HRT. Dr Biggs was on hand to answer as many questions as she could - given that the event had gone so much over the advertised finishing time!

The webinar consisted of 260 attendees from around the UK (male and female) on Zoom, 150 minutes of talking menopause and many many questions and answers, laughter and tears. There has been so much positive feedback since the event, including –

"During a 12 minute phone conversation, [my] GP was adamant that actually oral HRT is fine, perhaps I need to be on antidepressants or see a Counsellor. Anyway, she’s prescribing what Doc [Biggs] recommended yesterday. Perhaps a little victory which I would not have won without the webinar so thanks again."

"From a personal point of view this has made me realise what my wife is currently experiencing and professionally moving forward can only benefit the staff I look after."

"I realise from listening, that a lot of my issues are menopause – concentration, memory (particularly as I’ve always had a very good memory) – brain fog and that I’m not utterly useless, which is how I have found myself feeling."

"The seminar was brilliant. Informative and on a personal level made me realise 1) It’s not all in my head, 2) I’m not alone and 3) gave me the confidence to have a direct conversation with my GP (who earlier today, prescribed me the HRT patches to try!). The GP’s input at the end of the session was powerful – particularly coming from a SME. I can honestly say, had I not have dialled in to the seminar, I would have continued going around in circles with my symptoms which are having an adverse impact on me physically and mentally."

"I can’t thank you or the speakers enough for all their knowledge – I’ve had a tough time perimenopause. Verity Briggs..... I only wish she was my GP"

"Thank you Liz. I'm sitting here watching in tears ... I've been struggling for so long mentally and physically and realise I'm not alone and not nuts either."

"I just wanted to extend my gratitude for allowing other forces to join the webinar session you invited us to. As a result I have had a conversation with my GP and have made plans to resolve my symptoms. What was offered to me was quite limited, but having attended the session I was able to offer suggestions and came up with an alternative treatment that suited my lifestyle and was the option with the least risks. So thanks to the session I was more informed and could better suggest alternative treatment, rather than just accept their suggestion. In fact the GP actually said ‘Oh yes, yes we could do that, that would work better’!"

"What an experience, I attended the Webinar and enjoyed every minute of it – it was like being on an emotional journey listening to all the speakers one that I can totally and utterly relate to. I had tears and smiles in equal measures and finally and perhaps most importantly a light bulb moment that I am actually normal. Can’t thank you enough, seriously."

The webinar certainly has started a conversation around menopause not only within West Mercia Police but within the other forces that ‘attended’ and within the homes of colleagues. Attendees enjoyed the refreshing experiencing of open talk about a topic that has been hushed due to embarrassment for so long. The professional advice allowed women to feel empowered to take control over their own menopause experiences, and men and women felt able to approach partners and staff members to discuss the menopause. But this is just the beginning – we have started the conversation, we just need to make sure we can only get louder. 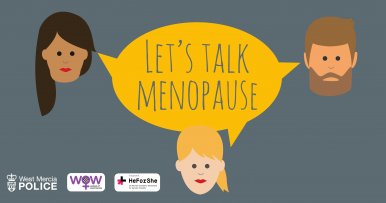