The Truth about the Link Between Alzheimer's and the Menopause

In this educative article for The Telegraph, Dr Newson discusses the investigation into possible links between Alzheimer’s and the menopause, as well as why it’s crucial that menopausal symptoms are recognised as such. Click here for the original article.

The menopause has long been associated with brain fog, but experts are now investigating a possible link with cognitive decline and even dementia

As new research suggests that dementia can be triggered in women during hormonal changes, Maria Lally reports on how HRT is key to an all-round healthier brain

Judith Graham, a 52-year-old events planner, visited her doctor in 2017 with symptoms including low mood, irritability and forgetfulness. “I was used to organising business events all over the world, flying groups of fifteen people to the US and putting together detailed itineraries. But then I began to struggle to concentrate in meetings, I forgot names, and I had real flashes of anger over minor things my children or husband did.”

Worse were her low moods. “I suffered terribly from postnatal depression after the birth of my son eighteen years ago, and it felt a bit like that. After years of feeling bright, organised and capable, everything felt like a struggle. I saw my doctor who prescribed antidepressants, and while they kept my mood stable, it wasn’t until I saw a new GP seven months later who knew about the menopause, that she suggested I wasn’t depressed at all but that the menopause was causing my symptoms. I was given hormone replacement therapy and my brain fog and depression disappeared.”

The menopause has long been associated with brain fog, but experts are now investigating a possible link with cognitive decline and even dementia, after it was found that two thirds of Alzheimer’s patients are women.

Lisa Mosconi, an American psychologist from Weill Cornell Medicine’s Brain Initiative in the US, who is currently studying the link between declining oestrogen levels during the menopause and dementia, says that the overwhelming number of female dementia patients isn’t down to women living longer. But rather that Alzheimer’s may be triggered during hormonal changes that take place during the perimenopause, which are the years leading up to the menopause.

Mosconi has published studies that have found menopausal women’s brains show signs of greater dementia risks than male brains the same age, and that there’s an increase in Alzheimer’s plaques during the transition from the perimenopause to the full one.

“Every woman knows that as you reach menopause, your hair goes dry, your skin goes dry – that’s ageing,” she says. “Few people are aware that the same thing would happen in the brain. Our brain cells start ageing faster.”

And it’s all down to oestrogen, which is a neuroprotective hormone.

“The brain likes oestrogen,” says Tania Adib, a consultant gynaecologist at The Lister Hospital. “It has oestrogen receptors and needs oestrogen to work effectively; to enjoy a fully functioning memory, good concentration and good serotonin production to keep mood levels steady. So it stands to reason there’s going to be a link between declining oestrogen levels during the menopause and cognitive problems, including depression, brain fog, confusion, lapses in concentration and memory issues.”

So, does the menopause increase your risk of dementia?

“To answer that you need to think about what happens after the menopause,” says GP and menopause expert Dr Louise Newson. “Your body stops producing hormones, which increases your risk of things like heart disease and type 2 diabetes, but also dementia.”

And some experts question whether a delay in taking, or failure to take, HRT can increase your risk of menopausal related dementia in later life.

Dr Newson says more research is needed on the link between the brain and the menopause, something the recent increase in awareness will lead to.

“In Victorian times, women died soon after their menopause, so nobody cared much about the health effects. My grandmother’s generation hid behind their apron strings, too scared to drive, and nodding off on the sofa. But today, women live until their eighties and work in often high-powered jobs right the way through and after the menopause. There’s something of a gender health gap at play here because we have this great treatment, available cheaply to the NHS, yet not enough doctors are educated in menopausal health, so women suffer unnecessarily.

“I’m a doctor and a mother of three and my brain not on HRT is awful. Leaving keys in the fridge awful. I would forget to take my children’s games kit to school, or struggle to remember the name of a drug I had prescribed for years.

“Some women’s brains are fine during the menopause, but some aren’t. Bright, capable women suddenly feel like the rug has been pulled out from under them. I see female patients with anxiety, low motivation, low mood, but they don’t link it to the menopause.”

Newson points out that antidepressant prescribing is ‘huge’ in women in their 40s and 50s. “They go to their GP and because they tick a lot of the depression boxes, and the GP hasn’t had much menopausal training, they prescribe antidepressants. But these women aren’t clinically depressed, so the root cause isn’t being treated. Research shows 60 per cent of women are misgiven antidepressants for menopausal symptoms.”

“Depression, mood changes and insomnia are very common in the years before, during and after the menopause,” says Professor John Studd, who runs the London PMS & Menopause Clinic and is Chairman of the British Menopause Society. “I see five women a day in my clinic with these symptoms. However, GPs usually mistake it for depression and mistreat it. Yet it’s very treatable with the correct hormone therapy that should be available on the NHS from your GP. GPs, however, would rather prescribe antidepressants than hormones because they’re easier. So, if your GP isn’t forthcoming, ask to see a doctor with a speciality in the menopause, or be referred to a menopausal clinic.”

Professor Stud says it’s difficult to prove that hormone therapy helps prevent Alzheimer’s and dementia, but says that, “it makes sense that it does. The earlier you go through the menopause the greater your risk of getting Alzheimer’s. So, it’s logical that hormones protect the brain. I wouldn’t recommend women delay getting hormone treatment. Lifestyle factors can also be very helpful.”

“We don’t know for sure that hormone replacement reduces dementia risk, but anecdotally it appears that way,” says Dr Newson. “We do know however that brain metabolism is better when you take hormones, and better blood flow to the brain also decreases risk.

“HRT isn’t everything. But it’s often a passport to a better brain in later life.” 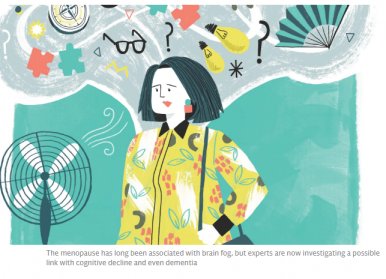