AndroFeme® 1 is a testosterone cream made by Lawley Pharmaceuticals. The testosterone in this cream is identical to the testosterone that the ovaries and adrenal glands in women produce. Levels of testosterone reduce during the perimenopause and menopause; testosterone is an important hormone for women and can improve libido as well as improve mood, energy, concentration and stamina.

Once applied the testosterone passes into the blood stream where it increases serum testosterone concentrations to normal levels in women.

The Australian Register of Therapeutic Goods (ARTG) has obtained approval for registration of AndroFeme® 1 for the treatment of postmenopausal women experiencing low sexual desire with associated personal distress, also known as hypoactive sexual desire dysfunction or HSDD. An estimated 1 in 3 Australian women aged 40 to 64 years experience HSDD and this is the first country in the world to have a licensed testosterone produce for women.

This means that Australian postmenopausal women will now have access to a medically prescribed, clinically effective testosterone formulation which meets the requisite quality and safety standards for registration for the management of HSDD.

For Perth-based Lawley Pharmaceuticals founder and CEO Michael Buckley, it is a decision that has been two decades in the making. “This is the first approval that addresses the need for a female-specific, regulated testosterone formulation for women.”  Mr Buckley said.  “It’s a ground-breaking decision for women across Australia, and hopefully in the near future, for women around the world.”

Australian specialists and researchers have for decades pioneered ground-breaking research into female sexual dysfunction and testosterone use in women. This collective of work culminated in September 2019 with the release of the Global Consensus Position Statement on the Use of Testosterone Therapy for Women (Global Position Statement) which was endorsed by almost twenty of the world’s leading medical societies and associations.

This is a global milestone in terms of gender equity, with the ARTG being the first regulatory agency in the world to approve a treatment for sexual dysfunction for postmenopausal women.”

Michael Buckley has advised Newson Health that “It is Lawley’s intention to examine prospects for UK and European registration of AndroFeme® 1 early in the New Year once post-Brexit arrangements are finalised.”

Mr Buckley added “There have been news reports here in Australia recently of UK-Australia free-trade discussions between our Prime Minister, Scott Morrison, and the UK Prime Minister, Mr Johnson. If a free trade agreement was to transpire sooner rather than later and included mutual recognition of pharmaceuticals licensed in our respective countries, it is possible that UK women may have quicker access to AndroFeme® 1.

This decision is a major step toward addressing the gender disparity in the treatment of sexual dysfunction that has existed for managing a very personal problem that is a source of significant distress for many women.”

Click here for more information about testosterone in women 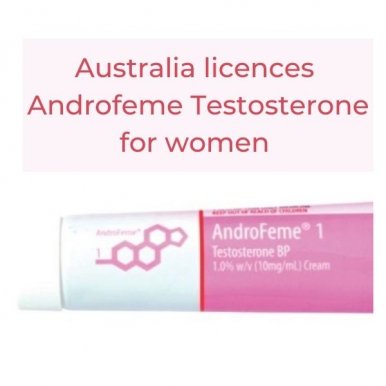