Reflections on my experiences in healthcare for Pride month

After seeing countless healthcare professionals over the last six years due to hormonal problems and menopause symptoms, Georgina now chooses not to mention her sexuality during appointments. Because of past experiences, she is worried that clinicians might treat her differently if she says she is a lesbian.

June is Pride month, a series of events celebrated every year as a tribute to those who were involved in the Stonewall Riots in New York, 1969, where police raided the Stonewall Inn, a gay club in Greenwich Village. Protestors fought for places where LGBTQ+ people could go and be open about their sexual orientation without fear of arrest. Today, there are marches and events held across the globe every year for everyone to embrace who they are and let the world know.

What does Pride month mean to you, Georgina?

“As a police officer, Pride to me is about encouraging people to have those open and honest conversations. There are so many people that still hide away who they are, and the Pride march in Manchester, where I live, is really great at helping those people realise ‘Oh, it’s not just me.’ It also encourages people to have confidence within themselves, helping them to live as their authentic selves, saving them from the turmoil of living to please others and neglecting who they actually are. The Pride march and other events really act as a support mechanism for those that need it, and I don’t think most people realise this. It enables charities to work within the event and reach people who they wouldn’t otherwise to help them. It’s a really fun and inclusive event, and many of the LGBTQ+ people that attend use it as a family day out to show their kids and other family and friends, this is who I am and that’s ok, or if this is how you want to grow up or how you identify also, that’s OK. Pride events help to remove stigmas and stereotypes from the community and engage people from all walks of life – whether you’re LGBTQ+ or not.

Thinking about healthcare settings, what has been your experience of doctor-patient encounters when talking about your reproductive health and hormones?

“Unfortunately, not always positive. I wouldn’t describe myself as unconfident in terms of my sexuality, but I tend to not disclose it anymore as a patient. I’ve had a few experiences that have put me off, mainly with older male doctors. I saw doctors about my hormone problems and was asking about my fertility as I knew having an early menopause could make it difficult to conceive. As soon as the consultant found out that I was a lesbian, he immediately said he didn’t need to treat my infertility as ‘there would always be another womb in the relationship’. I found it soul destroying that he could completely disregard my wishes and hopes to become pregnant one day and refuse to treat me, purely because my partner was also a woman. I don’t think this was necessarily his intention, I think he just had a stereotype in his head and thought his opinion was acceptable. There have been other times where I have sensed that if I mentioned my girlfriend, the doctor would be both surprised and disapproving, more subtly changing the way they approached me, to the point where I have actually lied and said ‘my boyfriend’ instead. The fear of my treatment being impeded because of my sexuality has been the overriding worry, even though it makes me feel really guilty by not being open – like I’m letting other lesbians down by doing this. There’s always going to be someone else like me in a similar position if we do not speak up and support each other. Because of these past experiences, I now feel stronger and more determined to fight for people’s rights, both LGBTQ+ or otherwise, to try and help end people having these kinds of experiences.”

If you could talk directly to healthcare professionals, what would you say to them?

“Be aware of your own biases, no matter how subtle or ingrained they may be. Watch that you don’t make assumptions, don’t jump to conclusions, or judge people who are LGBTQ+. This is a very broad community of individuals with varied concerns and aspirations, and you need to approach them as such, as the unique individual that they are. If their sexuality is relevant to your consultation, ask about it, don’t brush over it. Gain an understanding of how it impacts them and their view of how they want to be treated, do not work on a ‘one size fits all’ basis. Educate yourself on the different terms for sexuality and gender identity. If it’s not relevant, you don’t need to bring it up unless the patient does.”

How do you think you and your girlfriend will navigate both your hormones and her menopause when the time comes?

“I think most people really underestimate the impact of the menopause and symptoms due to hormones, on your work and your relationships. Even though I’m taking HRT it’s not plain sailing for me now, I still struggle with fatigue and other symptoms. It’s taken me over a year to understand my body and my moods and figure out what could be down to hormones or not. I think I’m in a good position to support my partner when she faces these changes, I do already just when it’s that time of the month! I think because we both realise how serious symptoms can affect you, we will do all that we can to protect our relationship against the potential damage caused by our hormones wreaking havoc on our moods and behaviour.”

And finally, what would you tell your younger self when you first started asking for help for your hormones six years ago?

“I regret that I didn’t do anything at the time about how poorly I was treated by some doctors. I didn’t have the confidence back then as I was only leaving my teens and becoming a young adult. Now that I have more confidence, I am fighting for what I need – my HRT on the NHS and not to be discriminated against – and I would encourage any young person in a similar position to not give up, keep trying and keep pushing to get what you need, for the sake of your career and your relationship – whoever you’re with.” 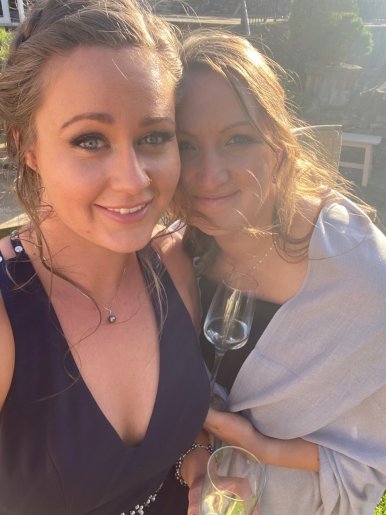