"Millions of NHS money wasted with delays in diagnosing the menopause"

Millions of NHS cash and hours of women’s time are being wasted due to failure to diagnose menopausal symptoms, according to a new survey by the not-for-profit organisation Newson Health Research and Education. One third of women had to wait at least three years before their perimenopausal symptoms were correctly diagnosed. A shocking 59 per cent of women with menopausal symptoms visited their GP between more than twice and 18 per cent more than six times before they received adequate help or advice.

The Menopause and Perimenopause Experience Survey was conducted by menopause specialist Dr Louise Newson on nearly 5,000 UK women, the majority of whom were in the menopausal demographic of 45-55 years. “I constantly hear from thousands of menopausal women how they are misdiagnosed with conditions such as fibromyalgia, migraines, depression, cystitis, irritable bowel syndrome and chronic fatigue when no healthcare professional has considered their menopause or perimenopause as being the underlying cause for their symptoms.”

Many women in the UK are still finding it difficult to obtain HRT on the NHS which would alleviate these symptoms and improve their future health. The NICE menopause guidelines state that for the majority of women, the benefits of taking HRT outweigh any risks.

The NICE guidelines on the diagnosis and management of the menopause are also very clear that women over 45 years do not need to have a blood test to diagnose the perimenopause or menopause. Yet this study revealed that 42% of women over 45 had a hormone blood test.

NICE have shown that over £9 million pounds each year is wasted by the NHS on inappropriate hormone testing and this money could be far better spent on more NHS menopause clinics which are desperately needed. “There are many GPs, like me, who are keen to work in NHS menopause clinics, but there is no NHS funding for these clinics, and some have closed in the past year” explains Dr Newson.

In addition, 13 per cent of these women with menopausal symptoms are being referred to hospital specialists for further unnecessary and costly investigations. Over one in five of these women had actually seen more than six different hospital doctors.

“Clearly this is a huge drain to the NHS when there is cost effective treatment available for most women which improves symptoms as well as lowering future risk of common disease such as heart disease and osteoporosis. In addition, 71% of women had had time off work to attend various GP and hospital appointments for their menopausal symptoms which is a personal cost to them and a cost to economy too,” said Dr Newson.

Many women live for several decades with the effects of low hormone levels in their bodies. The menopause affects all women and there are real health consequences (including increased risk of heart disease, osteoporosis type 2 diabetes, osteoarthritis, obesity and dementia) of not managing the menopause adequately. Doctors and nurses in all specialities urgently need to receive adequate training in the menopause to make a prompt diagnosis and also to be able to give women much needed individualised advice so they can receive evidence-based information and treatment.

There is currently no mandatory menopause education for doctors and nurses. This urgently needs to change, and menopause campaigner and psychotherapist Diane Dianzebrink is campaigning for there to be a significant improvement in education for GPs with her #makemenopausematter campaign. 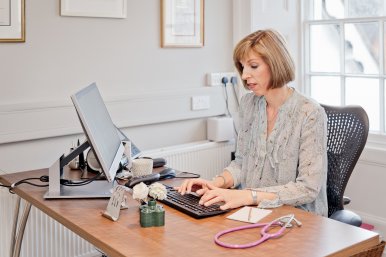