Lack of Support During the Menopause Leading Female Doctors to Quit

In this new report, the British Medical Association is calling on the NHS to do more to support doctors experiencing the menopause in order to retain them and reduce lost working days as a result of symptoms.

A BMA survey of 2,000 female doctors found that 90% said symptoms of the menopause had impacted their working lives, with 38% saying the impact was significant. Only 16% had discussed their symptoms with a manager, while a further 47% wanted to but did not feel comfortable doing so. The survey found that a 'significant number' had reduced their hours, changed their role or intended to leave medicine completely because of the issues they had faced while going through the menopause. There were 'multiple examples' of GPs leaving partnership roles to become locums or salaried GPs.

Women responding to the survey said that sexism and ageism had prevented them from speaking about how their symptoms affected them. However, the BMA said that it was clear from respondents with positive stories that life could be significantly improved 'by things like more flexible working and the introduction of workplace menopause policies that provide recognition, encourage conversations and signpost to support'.

The BMA said that employers needed to take a 'proactive approach' to the menopause. 'The health service is under immense pressure and we cannot afford to lose experienced doctors because of a lack of flexibility and support during a relatively short phase in life,' the report said. Most women experience the menopause between the ages of 45-55 and there are currently around 30,000 women doctors in this age group. This number is likely to rise in future because of the higher number of female doctors in younger age brackets.

BMA representative body chair Dr Helena McKeown said: 'Menopause is still a taboo subject in many workplaces and that includes the medical profession. The survey clearly shows that this is a significant problem within the medical profession. Doctors are aware of these issues for their patients, so it’s time to extend this awareness to an improved, more sympathetic working for doctors experiencing this themselves. 'We need to ensure that we retain women doctors who are a crucial part of the workforce. Simple steps taken now to help women experiencing the menopause now and for those in the future, will help to retain them and ensure less lost working days because of menopausal symptoms.'

GP and menopause specialist Dr Louise Newson said that part of the issue was that many women, including doctors, don't recognise that they are going through the menopause when they start experiencing symptoms.

She said that even as a menopause specialist she misdiagnosed herself and felt she was struggling in her job when in fact she was experiencing the menopause. 'I was seriously thinking, "I can't do my job. I can't function. I'm so tired - this is awful",' she explained.

Dr Newson said that the main advice she could give to women was to recognise the symptoms and access treatment. 'We have a cost effective, and really effective treatment, which is HRT, but doctors don't have training in the menopause so often don't prescribe it,' she said. 'We wouldn't need to talk about it in the workplace if we get ourselves treated

'The NICE guidance made clear women need individualised advice. So it's about recognising the symptoms, it's about looking at your future health risks – osteoporosis heart disease and so forth – and then having the right dose type of HRT and the right lifestyle advice as well.' Ensuring the menopause was included in doctors' training would also make a huge difference for all women' Dr Newson added.

This article first appeared on GPonline and is reproduced with permission. 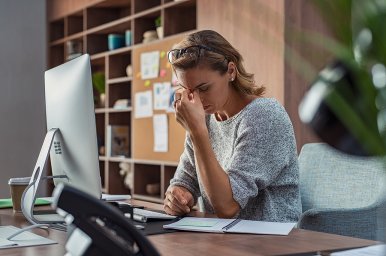