Taken from The Telegraph, 2 October 2017

Ask people what they know about the menopause and they will often talk about hot flushes, night sweats and mood swings. Menopausal women are often made fun of and they are the butt of many jokes.

What’s the big fuss about?” my 14 year old daughter recently asked me. “ I would love to not have periods!”

If only it was that simple.

We see a glimpse of how complicated it can be in Allison Pearson’s taboo-breaking book “How Hard Can It Be?” In it, she revisits her heroine Kate Reddy from “I Don’t Know How She Does It”, as she navigates the physical and emotional upheaval I see experienced by hundreds of women in my clinic. All their stories share a common theme – they are struggling with the demands of life without receiving the right help. Often they are blaming themselves and see no way out. Their relationships at home and work are impacted and they feel isolated.

As she wrote this book, I helped and advised Allison regarding facts about the perimenopause and menopause. Kate Reddy has so many typical symptoms which are still often not talked about (or misinterpreted) and they are finally being talked about in a truthful way.

In my opinion, the only advantage of the menopause is to no longer have periods. Many women find that their periods become less frequent, lighter and then stop all together. However, heavy and more frequent periods can also be a sign of changing hormone levels. The experience which Allison describes of Kate Reddy caught out by a very heavy period while in a meeting will resonate with so many women – myself include. I was caught out once on a family holiday in a Muslim country and I had to be bundled into a taxi with one of my daughter’s sweatshirts covering my trousers. A mortifying experience that my children (and me) will never forget!

But while we can laugh after the event, it is not so funny for millions of women as they go through menopausal symptoms. Anxiety, low mood, irritability, loss of self-esteem, loss of confidence, memory problems, poor concentration, tiredness, headaches, palpitations, joint pains, muscle aches, brain fog, urinary symptoms, loss of libido and vaginal dryness do not make this an easy experience for most of us. One lady told me recently “if I died it would be easier” and others say they have “turned into zombies” or feel like a completely different person whom they can no longer control.

My menopause training at medical school and also in general practice training was non-existent. My mother has taken HRT for decades and I have always been inspired about how active, both physically and mentally, she is compared to so many of my patients of similar ages. She has always extolled the virtues of HRT, constantly pleading and begging her doctor to continue prescribing it. My mother-in-law is the same.

Over the past 25 years of being a doctor I have usually given HRT to women who have asked for it. However, I am embarrassed to say that it is only in the past few years (since my interest in the menopause has increased) that I ask more direct questions to women about their symptoms. The more I question, the more I realise how dreadfully many women are suffering yet are not seeking help. Even when they ask for help, often they are being given inaccurate information from their doctors.

I frequently see women who have seen various other specialists for (often expensive) investigations such as brain scans for migraines, heart scans for palpitations, bladder scans for urinary incontinence and numerous blood tests (all unnecessary – there is no “test” for the menopause or perimenopause). One of my patients had been to different GPs 15 times in the preceding two years with menopause-related symptoms and came to see me worried she had dementia as her memory was so bad. No one had talked to her about the menopause and she thought it was insignificant to tell them about the hot flushes as the menopause is not an “illness”.  All her symptoms have improved with taking HRT and she now only returns to the practice for an annual review –  yet still, the majority of women I see in my menopause clinic are being offered anti-depressants by their GPs instead of HRT.

I admit that it can sometimes be hard to recognise symptoms as being related to changing hormones as women are often pulled in different directions by children, parents, partners and work. I am embarrassed to say that I had symptoms for three months before one of my daughters asked me if my irritability was related to my hormones. I had been putting extreme tiredness down to working too hard, the night sweats I thought could be due to lymphoma (doctors are notorious for thinking the worst of any symptoms) and the joint stiffness I thought was due to my age. My brain fog and forgetfulness were blamed on taking on too much work. I never once thought I could be perimenopausal, despite seeing similar women in my clinic all the time.

It has been estimated that only around 10% of women who would benefit from HRT actually take it. The majority of women I talk to are too scared to take HRT, worrying about a breast cancer risk, although they admit they do not know enough about it.

Oestrogen is the most important female hormone and without this hormone we have a greater risk of heart disease, osteoporosis and osteoarthritis. Oestrogen also works to build collagen, a building protein, so lack of oestrogen can affect our skin causing dry, itchy skin, more wrinkles, loss of elasticity and it can also affect the quality of our hair and nails. In Victorian times, the average age of death was two years after the menopause whereas now, thankfully, on average women live for thirty years after their menopause. Many of these women live with symptoms (as they can last for decades) but even those who are fortunate enough to have no or minimal symptoms (they are in the minority) still have the negative effects of low oestrogen on their bodies.

HRT is well researched and is safe for the vast majority of women. More importantly, taking HRT reduces our future risk of heart disease (including heart attacks) and osteoporosis.  Many women explain that HRT has “given them their lives back” and find their sleep improves and that they are a “nicer person to live with”. Taking the right type and strength of HRT can improve energy, motivation, concentration, mood, libido and improves the physical symptoms. I personally could not function as a doctor, wife or mother without taking HRT.

Most women I see in my clinic have put on weight as they are not exercising as they are either too tired or their joints are too painful and they are drinking more alcohol to try and help them sleep at night. So they are increasing their future risk of breast cancer by their unhealthy lifestyles without even realising it.

I feel very passionately about helping menopausal women have clear advice which in based on sound evidence. Like Allison has done with her book, women need to engage more in open and truthful conversations about how they the menopause is affecting them. Healthcare professionals need to be empowered with more knowledge and experience to correctly manage the menopause so women do not have their lives ruined by their symptoms . This way, women can share experiences and learn together. If they do not receive adequate help and advice, then they should strive to see a different doctor who can treat them based on the current guidelines.  Women should no longer be struggling alone. 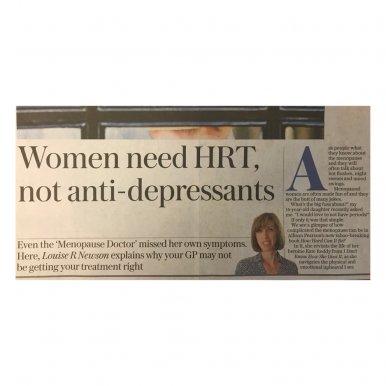