I was disappointed to read the media reporting about this study1. There is still much confusion and uncertainty about the benefits of HRT which include lowering future risk of cardiovascular disease and osteoporosis2,3. Many healthcare professionals are still concerned about prescribing HRT as they are not aware of the current guidelines on the diagnosis and management of the menopause. Research undertaken by the Primary Care Women's Health Forum (PCWHF) has demonstrated this.4

A recent survey of 2904 women revealed that 43% (1,152) were either disappointed or frustrated with the menopause care they had received and 66% (736) had been offered antidepressants instead of HRT which goes against current guidance. Women are struggling to receive evidence based treatment for their menopausal symptoms which often lead to them having worsening quality of lives. Many women increase weight and reduce their exercise because of their symptoms so are increasing their future risk of obesity, cardiovascular disease and osteoporosis; conditions which are already costing the NHS billions of pounds.

Research has shown that low levels of estrogen may lead to cognitive decline; there is an increased risk of dementia in women who have undergone a surgical hysterectomy at an early age5. The results of this study, which is not a randomised controlled trial, are clear that in absolute terms, 9 to 18 additional cases of Alzheimer’s disease a year will be detected in 10 000 women aged 70-80. This number is so small and needs to be considered in context. Some of those women in this study taking HRT might have been prescribed it for prodromal symptoms of dementia such as memory dysfunction. Of note, the authors clearly state that their previous research has shown a marked decrease in risk of death from vascular dementia in those on HRT6.

Women who start HRT within 10 years of their menopause and continue to take it in the long term have a lower risk of all-cause mortality, including from cancer7.

In addition, there is increasing evidence to support the use of testosterone in menopausal women as part of their hormone replacement therapy. Testosterone replacement in women has been shown to exhibit neuroprotective effects within the brain, including protection against oxidative stress, serum deprivation-induced apoptosis and soluble β-amyloid toxicity9.

It is so important that women are given accurate, evidence-based information so they can have an individualised consultation regarding their perimenopausal and menopausal symptoms. 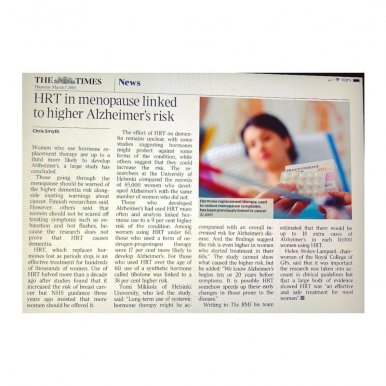